PROBLEM:
Even though fracking has been going on for 40+ years, public opinion and support of fracking have drastically declined. The industry has been dealing with non-peaceful protests. These were against property owners, gas providers and the industry as a whole. There was increasing pressure on politicians to improve tighter regulations. The public overall had received mixed information from various media outlets, online resources and extreme groups/individuals. There were some websites that were drowned out by a very loud online group. The opposition leveraged PR and social media to communicate their messages. Basically, the industry had a strong reputation management and brand problem. Many people in the industry are unsure of how to handle the backlash of public reactions. Virginia Oil and Gas Association (VOGA) is looking to create a positive presence online to educate the audience who is mainly on the fence.

This strategy allowed VOGA to maintain a positive image in the community and be an industry leader. Search engine optimization (SEO) has increased by 150%. Prior to the campaign, VOGA’s web presence in Google was at the very bottom of page three. It did not even show up under typical key search terms. Baker Creative crafted informative messaging and dialog to educate our target audiences. The campaign received positive engagement, inquiries and dialog on social media platforms immediately. The campaign had students and professionals inquire about education. Students thanked the client for their support in various communities. This improved public sentiments by our goal of 20%.

Overall, it took two months to see the positive results online. Education efforts align with their audience’s core values to educate the public. This helped them make an informed choice.

Currently, there have been no local protests or violent acts against VOGA. Political support has been higher than ever before. Many industry groups expressed an interest to join the campaign online and educate communities in their area. The campaign united the industry and provide companies an opportunity to build a positive sentiment of the industry. It allowed natural gas to grow as a positive clean energy resource in Virginia. 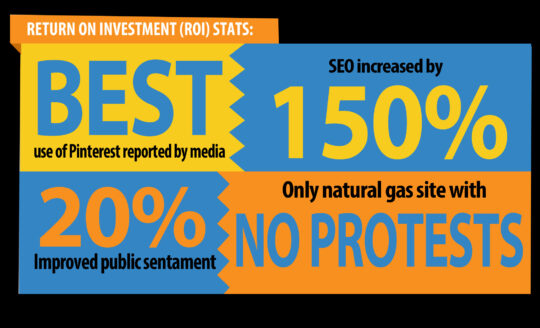